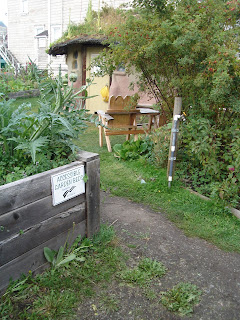 Firstly we discussed the possible sites. Robert Porter Park, at the far side corner of Kipling and Fairfield was the most favoured site. We decided to follow through with the city and this site in planning a community garden there.

We then discussed outreach. Henry, although he was unable to attend, is working on a pamphlet to hand out to people. Erika is working on a sign up sheet and paper survey. Erika is also heading the canvassing project and will be giving everyone some materials, forms, a survey and a ‘rap’ to canvass with. A date was set on Thursday October 15th at 6pm, to practice canvassing and receive materials. We will begin canvassing direct neighbours and other areas on Monday October 19th. It was also decided that a central email address would be created for the project, it is: fairfieldcommunitygardens@gmail.com, and all those interested would have access to checking and using the email. In addition we decided to create a blog, as a reference site. Chloe and Nashira will create the blog.

We also discussed Moss Street Market. Moss Street Village has a table there this Saturday and we will be using that table to talk about the gardening initiative. We discussed different ideas on what to do there. We will have the paper survey available, as well as the sign up sheet. We will also have an interactive survey regarding what design model people would like to see. As well we will have a Naming contest, which will likely be ongoing for a few weeks, although we will take people’s suggestions at the market. And we will have a suggestions board for people’s ideas and visions. Nashira volunteered to be there in the morning and Fran in the afternoon, Annie and Chloe will be there intermittently throughout the entire day and there will be 2 people at the booth for the market at all times.

Next we discussed a meeting that I was having the following morning with Doug Demarzo of City of Victoria parks. He wished to know the exact site so we could get official approval for the site and go ahead with a proposal. To report on the meeting as well, it was a success and we have been granted that permission by the parks division to go ahead with an official proposal. He confirmed that they will indeed put in a water line and provide water.

Finally we talked of else who to contact. Leadership Victoria was on the list, as was SJD and Margaret Jenkins, including PAC for both schools. Volunteer Victoria was another idea, as was contacting Central Middle School to involve youth. Nashira volunteered to investigate Central.

The next meeting will be on Thursday October 15th at 6pm, at the Fairfield Community Place, 1330 Fairfield Road, come ready to role play about canvassing and discuss further initiatives.
Posted by Fairfield Community Gardens - Food Security Sub Commitee of the FGCA at 11:46 AM No comments:

Feel free to copy and paste this survey in your email, fill it out and send it to us at fairfieldcommunitygardens@gmail.com

DO YOU SUPPORT A COMMUNITY GARDEN IN THE FAIRFIELD GONZALES NEIGHBOURHOOD?

DO YOU SUPPORT SUCH A GARDEN BEING ESTABLISHED IN ROBERT PORTER PARK? (ADJACENT TO FAIRFIELD COMMUNITY PLACE AND SIR JAMES DOUGLAS SCHOOL)

WHAT WOULD YOU LIKE TO SEE HAPPEN IN THE GARDEN? (I.E. WORKSHOPS, SPECIFIC FOODS BEING GROWN, PROGRAMS)

WHAT ARE SOME OF YOUR CONCERNS, IF ANY?

WHO WOULD YOU LIKE TO SEE INVOLVED IN THIS PROJECT?

WOULD YOU BE WILLING TO DONATE TIME/MATERIALS/MONEY TOWARDS THIS INIATIVE?


PLEASE INCLUDE ANY OTHER SUGGESTIONS AND OR COMMENTS!


PLEASE SUGGEST A NAME FOR THE GARDEN
IF YOUR SUGGESTION RECEIVES THE MOST VOTES, YOU’LL GET A PRIZE!
Posted by Fairfield Community Gardens - Food Security Sub Commitee of the FGCA at 11:39 AM No comments:

Here's what some people have said about the sites:

Of the sites my vote would be for Porter park as it seems the most central and most likely to attract
all ages to contribute to its growth.
I like the fact that its near the school and community centre as it would create a vibrant hub
for the Moss village community.
Thanks again!
Anna
Anna Norris; Community Member, Moss Street Village/ Street Life Participant: Fairfield resident


I am familar with all three locations and would vote in favour of the site near the Fairfield Community center, for all the reasons we discussed.

This email is just to formalize (put onto virtual paper) my preference for the Fairfield Community Garden location.

It's easy to visualize some sort of commons garden, mini-orchard and/or permaculture garden going into all of locations at some point (Chicken Park, Robert Porter Park and Pemberton Park). However, I think that Robert Porter Park is the best place to start the community gardens project (for a number of reasons), with the possibility of later expanding to the other parks and/or boulevards.

Porter Park is conveniently located, both central in Fairfield and adjacent to the Fairfield Community Place. The proximity to the Community Place would be useful; it could possibly be used as a temporary storage area for tools and such until we get a permanent structure built at the garden, possible bathroom access?!, and the potential to use the kitchen and hall for canning/jamming/cooking classes.

Also, as it is close to Sir James Douglas School, the Community Place, a couple of playgrounds and otherwise a fairly used park, I expect we'd have more interaction with the public than in the other parks. The benefits to this is that more people would learn about the project, with possibly more volunteers signing up, goods being donated etc. The higher the interaction with the public the more public interest there would be.

My third reason for supporting this location is that it gets the most sun out of the three parks, and so should be easier to grow a wider variety of plants.

I agree that Porter park would be the best place for a community garden. It is in walking distance to my house which is a big factor due to the fact that I do not own a vehicle. Also it is such a visible location whereby people/children could come learn about community gardening. More people might want to become involved after they see the benefits of growing our own food.

As for my vote for which site, I am going to suggest the Porter Park site as well. My reasons are similar to what others have already said:
-central location, in the 'heart of Fairfield' (maximizing community access and potential involvement)
-proximity to school (potential to involve children)
-next to community centre (storage, resources, space for meetings and/or workshops)
-just feels like the right spot

My first choice is the location next to the community center. I like this site for it's permaculture potential, and I like that it is so close to the market and the community center (so we can go inside if we are doing workshops, etc.). However, I like Chicken Park almost as much as my first choice. I think Chicken Park actually has a lot of potential for a couple smaller plots, and doing some interesting things with the landscape. So I think Chicken Park is also a really solid choice. 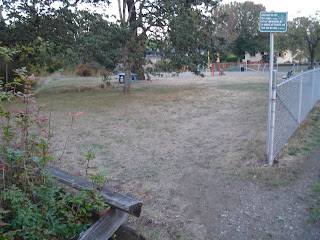 We're looking at 3 sites for the community gardens.

All three sites are park lands. 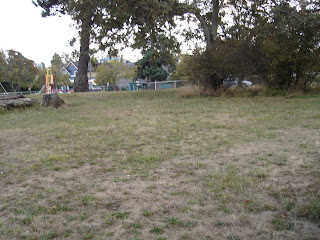 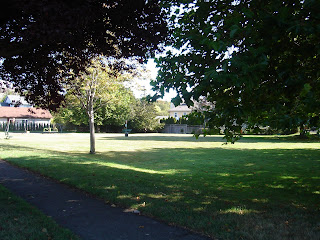 The next site is "Chicken park" at the corner of Bushby and Ebert. 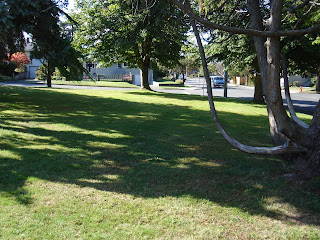 chardson and Gonzales.
Posted by Fairfield Community Gardens - Food Security Sub Commitee of the FGCA at 8:40 PM No comments:

Here are some ideas that came out of visioning session we did in September:

Elizabeth spoke to having to cob oven and/or a cob bench. She also spoke of involving cob education/workshops and having the opportunity to learn this and grow and share fruits and veggies.
Annie also elaborated on sharing food, and maintaining an open invite to the space, recognizing the potential for an ever evolving team and group of people. As well as the use of other educational tool to enhance the gardens
Naomi spoke of having the gardens as a permaculture demonstration site. Evolving the gardens into a sustainability model with rain catchment system, bio-regional food growing, and bicycle powered blenders for example. She also spoke of having varying workshops of how to store and preserve/dry foods and herbs on-site. She also elaborated on accessibility to people with varying disabilities: wheel chairs access, and access for blind people, etc.
Verna spoke of her interest in a more conventional plot allotment type garden, and what the policy would look like around those who were not Fairfield residents (as she herself was not entirely sure which neighbourhood she was in). She spoke of ideas for single plots and group plots. She also spoke enthusiastically of the hope for fruit trees.
Ken spoke of a type of alternative model that embellishes our need for further action towards food security in Victoria. The model would resemble a Food forest/Urban farm. This can be done in boulevards like a smaller CSA (community supported agriculture) in an urban setting, and supporting gardeners with financial retribution. Ideally transforming Fairfield into a food forest, or a more sustainable environment food wise, he embellished a new vision for Victoria’s green space, one that acknowledges the need for food security.
Chloe spoke of her desire to see a shared commons space and her excitement and desire to see the use of cob.
Nashira spoke of her interest in plot allotments, and her belief in the importance of community gardens in any neighbourhood. She spoke of wanting to see the community involvement and the importance of openness towards those interested rather then an exclusive lot only with those who have allotments. She also spoke of food collection as in her experience, often food can go un-eaten and a weekly food collection would be fruitful (literally). She elaborated on the importance of Compost and creating a solid policy around what can and can’t be composted on-site. She spoke of how important the educational component is for this garden, and that it involves youth of all ages. She also spoke of the importance of having community gatherings for the gardeners to enhance to relationships and build a group that works together.
Ideas that came out of the visioning were :
-The importance of educational component to the project : the gardens as a teaching tool ; involving youth and children
-Cob : workshops, and structures : oven, bench, tool shed
-Fruit trees
-Permaculture design, and demonstration sites
-accessibility for those with disabilities
-finding the best model for us : plot allotments, commons, communal gardens, single plots & group plots?
-The transformation of Victoria and Fairfield into a more food secure city.
-Collection days for food that is not getting picked and eaten
-Compost : a good inclusive policy around what’s what for compost needs.
-Having gatherings within the gardens to enhance the community
Posted by Fairfield Community Gardens - Food Security Sub Commitee of the FGCA at 8:36 PM No comments:

Check out the community gardening forum at: http://www.mossvillage.blip.tv/

Included on this site are various other presentations and group discussions on community building.
Posted by Fairfield Community Gardens - Food Security Sub Commitee of the FGCA at 8:04 PM No comments: