Next meeting Saturday March 27th, from 10-11.30 at the FGCA place: 1330 fairfield. We're in the meeting room behind the reception desk.
Hope to see you there!
Posted by Fairfield Community Gardens - Food Security Sub Commitee of the FGCA at 2:18 PM No comments: 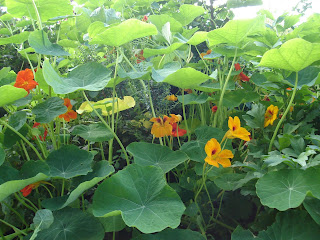 Many ideas were shared, the meeting included a brief walk about on-site, as well as big picture ideas, and smaller more focused brainstorms.

-We discussed creating an umbrella for the community Gardens, calling it the Food socurity collective or something of the like. This idea was well received though most of the group wanted to focus on the garden and then move onto to re-identifying the group. Nonetheless this discussion gave us the opportunity to look at the big picture, the future and what we saw this group evolving into.
- We talked about doing outreach mostly on the grounds of canvassing, and talking to senior's centre and Sir James Douglas and Margaret Jenkins school to see if they want to be involved in the project. Chloe and Kimberly agreed to do some canvassing within the next 2 weeks.
- A presence at Moss Street Market was discussed, it was thought that it would be great to have a monthly spot at the market for outreach and information purposes.
-We talked about the proposal that would need to be submitted to parks/the city of victoria. The group agreed that we would like to apply fr a matching grant from the city.
- As for the plan of the garden, some members of the group have been in contact with a permaculture design course that's happening here in Victoria. The organizers of the course are interested in having a design project with us, and creating a design for the park. We discussed that we would need to have a meeting with some of them, to talk about what our needs were, and ideas and the feedback we've already gotten from the community, but that would otherwise be a great opportunity.
-We talked about plot allotments, and the desire to have some allotments was voiced by most of the group. It was brought up that we need about 10 more interested candidates to bring that forth in the proposal, to state the interest and need for allotments in Fairfield. The list is currently at 11 people.
Finally, as mentioned earlier, we agreed on a regular meeting time, every two weeks, as the Fairifeld Community Centre, from 10-11.30, the next meeting will be on March 27th, the room will be announced shortly.
- We also did a walk around of the site to close the meeting and were looking at other possible areas, especially if we wanted to integrate allotments. The area where the bonfire is located looked promising, this would not necessarily even mean moving the fire, although that may be best, as we integrate it into the design of the commons. We will soon be following up with parks on this idea to look at this new slightly different location.
-as a final note, memberships to the group was discussed, as a way to get some start up capital. Perhaps people join for 10$ and that gives us a bit of cash flow. This idea as well will be followed up with the FGCA to see how we can do this.
That's all for now.
enjoy the fresh moist spring soil!
Posted by Fairfield Community Gardens - Food Security Sub Commitee of the FGCA at 5:29 PM No comments: 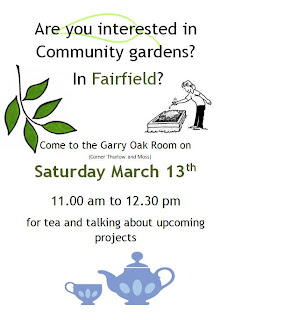 Posted by Fairfield Community Gardens - Food Security Sub Commitee of the FGCA at 10:31 AM No comments:

Here we go again, after a winter of rest and rejuvenation (i hope), we're back in the swing of things with garden preparations and plans.

With images of bountiful fruits & vegetables in mind, I would like to invite you to a gathering at the Garry Oak Room (corner Thurlow and Moss), on Saturday March 13th from 11-12.30 for tea and conversation about community gardening in Fairfield. We will discuss the Robert Porter Park Plans and any other ideas.

Please invite anyone else you know who is interested in community gardening.

Hope to see you there.
Posted by Fairfield Community Gardens - Food Security Sub Commitee of the FGCA at 10:27 AM No comments: